My first semester of college I took a microeconomics course. I learned a lot from this class but one of the biggest things I took away was the following.

“When traffic is congested, each driver is imposing a cost on all other drivers on the road –he is literally getting in their way (and they are getting in his way.) This cost can be substantial: in major metropolitan areas, each time someone drives to work, as opposed to taking public transportation or working at home, he can easily impose $15 or more in hidden costs on other drivers.” – Microeconomics by Paul Krugman and Robin Wells

The point is, I had never really thought about the negative economical factors involved with automobiles. The environmental impact is something I’ve always known is terrible. Automobile driving is a major cause of:

Americans drive an average of 231 miles per week, which comes out to about 12,000 miles per year. For a car with average miles per gallon (21), this is 571 gallows of gasoline annually. Given that every gallon of gasoline used emits 20 pounds of CO2, that means our cars are emitting 11,420 pounds of CO2 each year. The Union of Concerned Scientists stated, “personal use of cars and light trucks (including pickups and SUVs) is the single most damaging consumer behavior.” In fact, the most significant change an individual could make toward reducing their carbon footprint is to cut down on how much they drive. Here’s how: 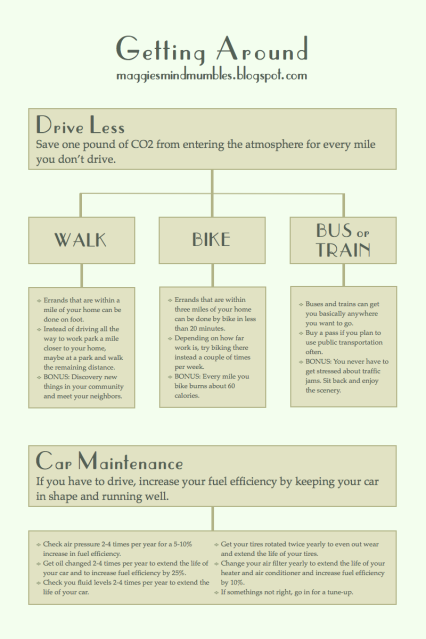 Lastly, be a considerate and cautious driver. Fast accelerates and decelerations are damaging to your vehicle and the environment. Moral of the story: Be the tortoise, not the hare. In this classic children’s tale, the tortoise proved that slow and steady won the race. The arrogant hare who burst from the gates and slams on his breaks for a rest proves that being a jerk never got anyone anywhere. Or at least that’s what I got out of it.
How do you cut back on your car time?

Error: Twitter did not respond. Please wait a few minutes and refresh this page.